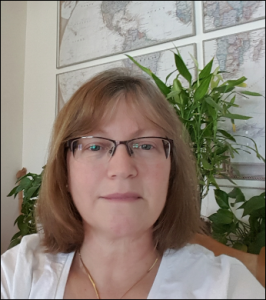 Raised in Hollywood, Lin Thornhill traveled extensively with her family. She attended school in Wales and rural Norway, and fondly remembers learning to ski under the midnight sun. Now, she lives in southern California with her beloved husband, their two sons, and a faithful Malamute.

Lin has loved the written word since watching her mother’s fingers trace the lines of a book, luxuriating in riveting tales and well-turned phrases. Many a night she read until dawn, a plastic flashlight hidden under the covers to light the pages as she raced the rising sun to finish her latest must-read.

While in college, Lin befriended Academy Award winning writer Albert Maltz who encouraged her ambitions. Later, she studied story development and writing at AFI from renowned lecturers including Billy Wilder and Ernest Lehman.

During her time at the studios, she provided coverage for unsolicited screenplays, and met and worked with many great filmmakers. Danny DeVito offered regular advice even while she was in labor. Oscar-winning director Tony Richardson was a longtime supporter. Stanley Kubrick happily argued with her about art, censorship and A Clockwork Orange, sending yearly Christmas gifts until his death.

And yet, she grew disillusioned by the prevalent lack of backstory in screenplays. Lin turned to prose and discovered fanfiction, finding it a remarkable opportunity to develop as a writer.

Since joining the HP fandom, writing under the pseudonym Bambu, Lin has been privileged to receive more than 50 awards, including Best Author. Among others, her stories have won awards for Best Hurt/Comfort (Spoils of War, Morning Has Broken), Best Novel Length (Calling Card, Guard…Check…Mate), Best One Shot (A Beach in Ireland), Best WIP (Saving a Death Eater, The Summoning), Favorite Overall Story (Complexities), and Readers’ Choice (A Quest of Paladins).

Like many fanfiction authors, Lin has turned her focus toward to original work. She is a member of the Romance Writers of America and the Southern California Writers Association.

Lin’s original story Verisimilitude published in Thoroughly Modern Monsters reached the top 100 fantasy anthologies and broke into the top 10 in the UK the first month of release. Ben and Christine’s story will continue in 2016. Fixation, Lin’s latest short story, can be found in J.L. Aldis’ anthology Immanence. It  is particularly exciting as the story anchors the Melting Pot novel series she’s been developing this past year.