May, 2016: The Melting Pot series is in the works! It is an urban fantasy series whose protagonist comes of age as a Japanese mythical shape-shifter living in Los Angeles. 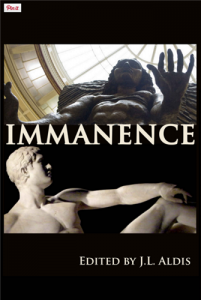 July, 2015: Fixation, a short story anchoring my novel series The Melting Pot which I’ve been developing this last year, was accepted for J. Aldis’ next anthology, Immanence, slated for release winter/spring 2015-2016.

October 1, 2013:  Today’s the day. Verisimilitude is released by Story Spring Publishing in its inaugural anthology Thoroughly Modern Monsters. This isn’t a culmination, it’s a beginning!

July 2013:  Hard to imagine it’s almost been a year since I’ve posted. The year has been both challenging and eventful, and I’ve begun to resurface and flex my fingers. It’s awfully good to be writing again.

When last I posted, my short story Verisimilitude had been accepted into an anthology (With A Twist) to come out in the fall of 2012. Regrettably, it fell apart. But, I’ve been lucky enough to place it elsewhere, even amidst the chaos of this last few months.

There will be more details in the upcoming weeks as I learn more details. In the meantime, it’s really good to be back.

August 2012: There is cover art for With a Twist! (which sadly never came to fruition)

As of July 2012: The polished version of my short story, Verisimilitude, has been sent off to the editor of With a Twist: Not Your Everyday Vampire Stories, an anthology. Publication is set for this fall.